Today, my guest is Sharon Hopkins, author of Killerwatt, Killerfind, and the soon-to-be-released Killertrust. You all met her husband, Bill, last week – together these two are the Deadly Duo. READ THEIR BOOKS, and you’ll know why; between them, they’re showing a respectable body count as per their novels (disclaimer, in case anyone reading is a smart aleck – or a government agent).

People often ask me, “How do you come up with your characters?”

My short answer is, “They are all in my head, waiting to get out.” And that’s true—

both the animate and inanimate ones.

When I began getting the idea for my first book, Killerwatt, the character of my protagonist Rhetta McCarter was already rattling around my head, but I had to bring her to life. Before I even began writing the story, I started with a new clean document and began typing everything I knew about Rhetta—her occupation, spouse, pets, birthday, age, height, weight, what she liked to wear, and what her little idiosyncrasies were. I printed out the sheet with her info, and keep it by my laptop for reference. I never count on my memory to remember everything about her. I add to the sheet as every story goes on, and she reveals more about herself to me. I add those facts to my notes.

I do the same for all of the other principal characters in the books, too. Their age, spouses, where they went to school, their education, where they work, what they drive, etc.

Now the trick is how to tell the reader about the characters?

The way I like to do it is by describing actions and through dialog. Dialog gives the reader immediate insight into the character. To dialog, I add mannerisms and actions. No information dumping allowed. I release a little at a time, just enough to cover a point in the story. By the end of the book, the reader knows who she is and what she’s like, but can’t really go to a specific location for all the description.

Now, let’s talk about an inanimate object as a character. In this case, the secondary character, who is her Camaro.

When I put Rhetta behind the wheel of a classic 1979 restored Camaro that she calls Cami, I never realized how popular the car would become with the readers. Rhetta obviously loves her car, and when something bad happened to it in Killerwatt, many readers wrote to me and said they were devastated to read about Cami’s fate. I tell them to read Killerfind, which starts out with a story about Rhetta’s search to replace Cami, and leads to two murders and something exciting concerning Cami.

Cami is now a regular character. The nice thing about inanimate objects is that they can come back to life!

So characters don’t always have to be people. They can be houses, cars, motorcycles, cats, dogs, etc. Just make sure that you, the writer, know as much as you can about the characters when you begin writing about them. And listen and make notes about them when they tell you about themselves.

Thanks, Robin, for inviting me today. I’ve sure enjoyed the visit! 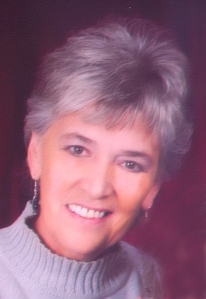 Sharon is a branch manager for a mortgage office of a Missouri bank. She also owns the original Cami, the 1979 Camaro featured in her books.

Her first Rhetta McCarter book, KILLERWATT was nominated for a 2011 Lovey award for Best First Novel and was a finalist in the 2012 Indie Excellence Awards. Her second book, KILLERFIND, was released in July, 2012.

Sharon also spent 30 years as an Appaloosa Horse Club judge, where she was privileged to judge all over the US, Canada, Mexico and Europe.

She lives on the family compound near Marble Hill, Missouri with her husband, Bill, next door to her son, Jeff, his wife, Wendy and her grandson, Dylan, plus two dogs, one cat and assorted second generation Camaros.

Her books, KILLERWATT and KILLERFIND can be found on http://www.amazon.com, or directly from her home page at www.sharonwoodshopkins.com.

The third book, KILLERTRUST, will be available in 2013.

Signed copies are available at All on the Same Page Bookstore, 11052 Olive Blvd., Creve Coeur, Missouri.

3 comments on “Characters and Camaros”