I don’t often blog about my book series, REDUCED, because, well, you know how that goes. Besides, they’re all listed down the sidebar here—————->

But just in case you missed all that, and you want more info, I’ll lay it out all nice and neat. And of course, if you’ve read them, feel free to tell everyone how great they are!

[Should I insert a j/k or a wink here or something? Nah, you get that this is all a making-fun-of-promotions thing, right?]

A devastating biological agent is about to be released, to be tested in remote areas. Rumor has it, though, that there is more to this than meets the eye. One group makes plans to hide out, and survive, in case that rumor proves to be truth. Meeting at an abandoned summer camp near St. Louis, Missouri, a dozen old friends gather after the alarm is raised.

Abby, like the rest, has special skills – each member of the group was chosen not only because of past ties, but also for their unique training and abilities. She will come face-to-face with death, bear the responsibility for a young girl, and endure the severing of childhood relationships in the most terrible way imaginable.

From mere concealment to reconnaissance to aiding a rebellion, where will it end? Will the entire region be decimated, and who will be left alive to know?

Colonel Barton has been replaced, and the new commander is sending his henchman, Major Blake, to scour the outlying areas and remove any insurgents. Abby and the girls have remained in the cave at the camp, relatively safe for now, but plans are underway to eliminate all of them… for personal reasons, known only to the commander himself.

Soon, however, worlds will collide as Captain Alison Hinson is transferred in from Chicago. In spite of her background, Alison is horrified by the tactics of her superiors in the field and begins to question her own stance on the new government. As she puts together the pieces of the past, she realizes that she and Abby are kindred spirits, faced with a mission not of their own choosing but of circumstance.

Across the country, while officials and mercenaries live the high life, the citizenry are faced with more sanctions, more regulation, and fewer necessities.

Pockets of rebellion are quickly quelled, but incidents continue to increase as more people make the decision to go underground. Literally.

From abandoned caves below St. Louis itself to a subterranean river winding north into Illinois, REUSED will tell you more, perhaps, than you truly wish to know about the potential for the utter collapse of our civilization. 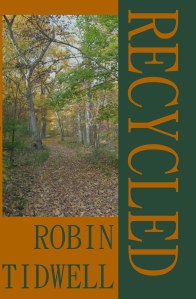 Survival had become a way of life since Co-opComm first launched VADER. Thirteen years had passed, and yet, Abby remained . . . she and the others prevailed where many had surrendered. And died.

Abby is tired. Tired of running and hiding. Tired of struggling, tired of fighting. Ultratron has a new secret weapon—a better, improved version. And the government-sponsored company has a new target, a more heinous plan.

Traveling to Chicago, the heart of the current regime, they come face-to-face with a new threat—or is it? Who is this mysterious Riley, and what does she know about the St. Louis compound? And how? Shadowy inhabitants arise from the depths of the city, but are they friend . . . or foe?

But Abby has only one objective: to defeat the government. Regardless of the cost.