Sorry this is late today, but we FINALLY GOT TO SEE THE NEW PLACE! Sorry again, but I thought that deserved all caps!

It’s been three weeks since we made an offer and it was accepted, the day we were first supposed to see it and it snowed. It snowed every other single time we planned to go down there too.

What was the first thing I saw as we drove up the county road? Chickens. Damn chickens. On our new property. Argh! Not ours, thankfully, but the neighbor’s. Someone’s going to have to train those things to stay on their side of the road. Probably me and Bob. 😉

Anyway, we pulled in, right by the barn, and drove past, rubbernecking the whole way, back to the house. Just about the time we got out and started walking around the outside, the seller pulled up. Good thing for us—the listing agent was out of town and our agent was tied up today, so we hadn’t planned on going inside. Mr. C was very gracious, unlocked the house and barn, gave us a tour, and answered all our questions.

So, a few unusual things we discovered:

The “older house” is in much worse shape than the pictures showed. Much. Worse. But hey, that’s okay, there might be some salvage, or maybe eventually we’ll work on it. At least it’s not leaning . . .

There are homemade doghouses near the main house, three or four. Hmm. Mr. C. said that a lot of people dump dogs out there, and his wife used to take them in; so he built the houses for them. And kept them. Hmm.

Here’s the best part: I’ve been planning an irrigation system for the garden we’ll put in, starting this spring, but get this—all along the drive, between the barn and house which is where I was thinking to break ground, there are spigots! Woot! 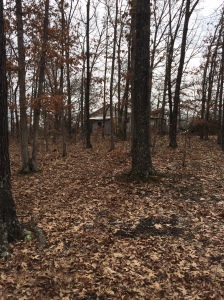 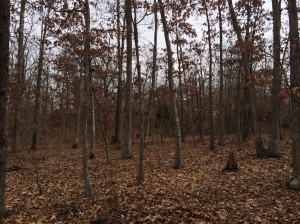 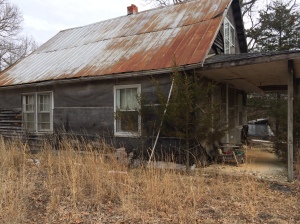 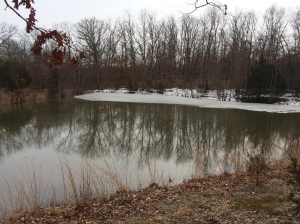