First, I want to give a shout-out to our new friend Ed, who had asked if he could leave his trailer at the farm in between a fishing weekend and helping us out with clean-up. Instead, he ended up camping out there for almost a week AND re-filled the dumpster! Not to mention that he had a lot of helpful suggestions all weekend long, and a lot more for future improvements . . . Oops, and dinner on Friday night!

We came out Friday and decided to just sleep in the house, sans furniture, because of all the junk still lying around. Electric and water were turned on, everything worked, nothing leaked. Yay!

Went to bed around 10:30. It was dark. Very dark. My husband asked if we should turn on a light. YES! Um, please? Well, when I said “no furniture,” that meant “no bed.” Damn, the floor was hard, in spite of a lot of quilts underneath us. I knew my first job in the morning would be taking Advil. It was.

Then we heard a “blup.” And another. WTH? Kind of sounded like a dripping faucet, but my husband checked them all. Nope. That wasn’t it. Then we heard a few other things . . .  I tried to tell myself it was just the sounds of the house, but it wasn’t quite working.

I kept thinking of all the horror movies I’ve seen, and I’ve seen quite a lot of them. Especially “Cabin in the Woods.” Um . . .  Well, we never did find anything, but I swear, I woke up every half hour until the sun came up . . .

On Saturday morning, we located the campsite and marked it—thankfully—and literally pushed over a few dead trees. Timberrrrrrr!

The rest of our “crew” arrived around 10:30 and got the full tour. Since we only have one interior wall in the house, and no interior doors but lots of windows, the word of the day was “BATHROOM!” at which point everyone else would turn away from the house. You know, for privacy’s sake . . . About halfway through the day, Sally rigged up two old sheets, so everyone breathed a bit easier.

We’d planned to drill holes for the outhouse and kitchen shelter and set the posts, but alas. The auger we’d ordered didn’t arrive, in STL, until about 7:00 p.m. Friday, long after we’d headed out to the farm. Go figure. Thanks, UPS. 😦

So we blew leaves. And raked leaves. From under the decks, around the trees, and all down the side “yard.” We found the firepit—quite a nice one, which we cooked on and sat around both nights, listening to whatever-that-was rustling around in the grass.

We found other things, too. Odd compost heaps, enclosed in rusted wire. Lots of gallon ice cream containers with . . . stuff in them. At least one was full of fish guts. Um, what?? And extension cords leading to the lagoon. And socks. And shoes. And—I’d ask you to guess how many waterbed mattresses we found lying around near the house, but you’d never get the answer right. 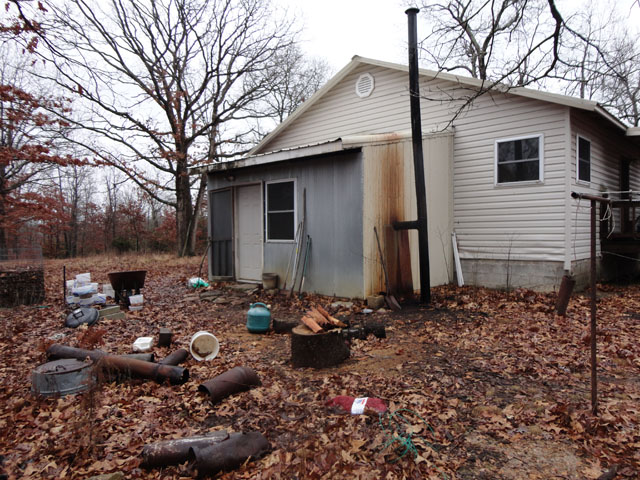 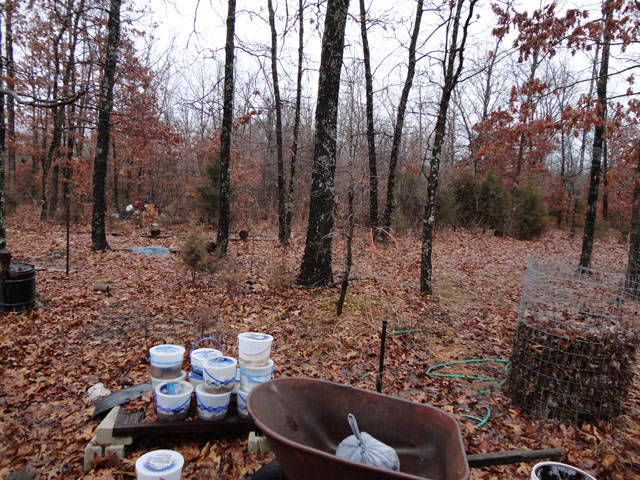 Also an animal skull. And bones. Big ones. Not entirely sure from what, but I really hate to speculate.

We got rid of a ton of trash, and then burned the leaves. Well, not all of them. But a lot. 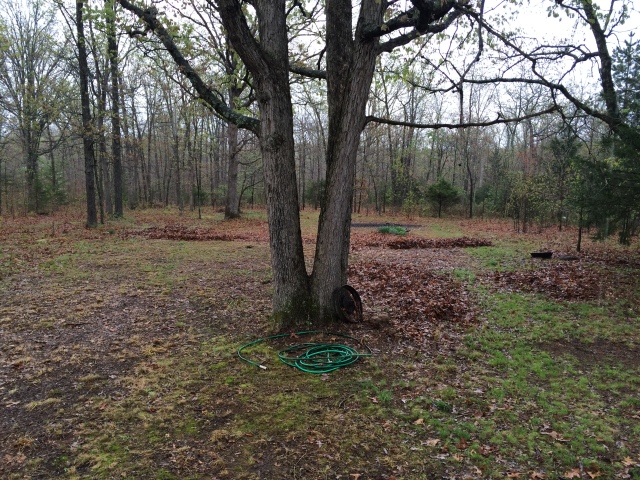 On Sunday morning, it was pouring rain. The good news is that we discovered the stove works too—good thing, because coffee was high on my list of priorities even though Saturday night was much more comfortable: we broke down and went to town Saturday and came back with an air mattress.

Plus, the house was a lot quieter. Or maybe I was just exhausted. Or maybe those four beers knocked me out and I wasn’t budging until morning . . .

We came “this” close to finishing clearing out the barn. That whole right-side wall was practically cleared off, along with a lot of other stuff lying around. Of course, the dumpster was filled again, and we still have a huge pile outside and one inside too.

By noon, I was done. D.O.N.E. Exhausted, with a three-hour drive still ahead of us, we left around noon. Whew. Busy, busy. And this morning, I started right up with the lists for the next time!

5 comments on “Prep Monday—Down on the Farm”