THIS was the big project this past weekend: the garden. Now, we’re not talking containers, and we’ve moved well beyond our two at-home 40 X 3-foot raised beds, which we’re still using and are full. And no, the current size of the new one isn’t even close to what it’ll be when finished, all the way to the barn.

Boy, do we need a tractor!

We have this push-trimmer thingy, not sure what it’s called, that we got from my father-in-law. It does a passable job, about two feet or so wide, but of course you have to push it. And, too, you have to move stuff first—like square wooden planter boxes and rocks.

A lot of rocks.

In fact, it appears that the former owner was mostly growing rocks—I kid you not, across the drive is a square planter box with LARGE ROCKS in it. Sheesh.

So last week, my husband cut the grass, over a foot high, and I moved rocks. This weekend, I finished digging them up. Or so I thought.

Even yesterday morning, when we left, I saw MORE. I promise, it’s like a crop down there . . .

Then we brought out the tiller. My husband said it’s a 1979 model. More like 1959, but whatever. It works—if you can hang on to the sucker! The first time, I gave up after a row; then I took on the challenge, which I’m paying for today. Just a bit. Guess I’m a little tougher than I thought!

So, I’m guesstimating that we have about a 50 X 25 foot area cleared, so far. And I used the rocks, to build a wall, a partial border. And I have a nice spot under the trees in back to sit and watch my rock crop grow . . .

Remember Blackie, our new pet? Cute as a button, about four inches long, smaller diameter than a pencil. Adorable.

We met his father, who is considerably larger than a pencil, and about 4-5 feet long.

He lived in the line of tires, also in the garden, that were put there for absolutely no discernible purpose except to grow weeds. And snakes. 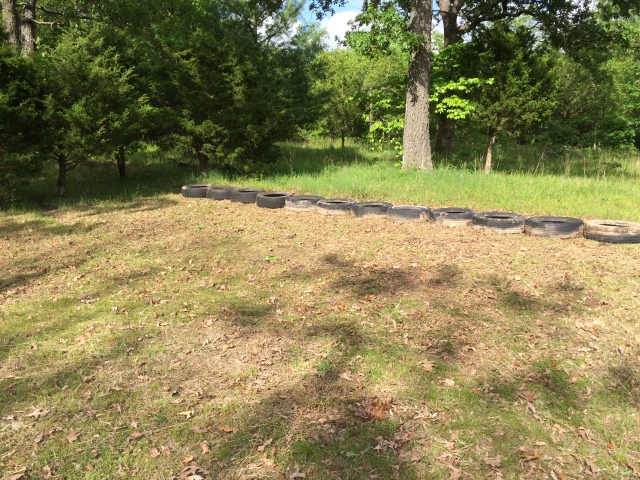 All but four have migrated across the road—tires, not snakes—to create a bumper for extra parking. And next week, the planting will commence: asparagus, cantaloupe, zucchini, squash, green beans, and more.