This week, because of a charity festival we plan for all year and work (a lot!) on the last weekend in June, we didn’t get down to the farm until Monday. I figured we’d leave the STL area around 7:00 a.m., but thanks to working 40 hours over four days at the festival, I didn’t actually drag my butt out of bed until 8:30—unprecedented!

So, we left around 11:00 and arrived about 1:30. After a quick lunch, and taking care of the dogs (this was their weekend with us), my husband started the never-ending mowing of the pasture, yard, and all points in between. My son and I unloaded the car and truck and got organized in the house before said son started up the final brush burning.

About half an hour or so later, my husband came zooming up on the mower and grabbed the shotgun. “SNAKE!” he hollered, as he rode off into the pasture. BOOM. That snake was history.

Dinner time around here usually signals the end of the work day, but my husband was still mowing. I, however, saw no reason to break with tradition, so I popped open a cold one and sat on the deck, watching the darkness descend and listening to the night sounds.

We usually get up around 6:00 and have coffee on the deck, and start working around 7:30, after breakfast.

This, you must understand, is huge. I NEVER cook breakfast, except when we’re here. I get a tad “Little House on the Prairie” and all, down here on the farm.

Tuesday’s projects began with the garden. The kid did some tilling and then started weeding; I planted—yes, it’s late, but better late than never and we’ll still get a good crop in. The green beans are doing really well, as are the carrots, cayenne, sage, cucumbers, and cantaloupe. This week we added corn, zucchini, and two kinds of beans: pinto and kidney.

Then I spent half an hour getting drenched while adjusting the sprinklers and the timer.

My husband stopped at the garden to tell us the neighbor’s horses had gotten out. We didn’t see them, even looked over the property, but they were who knows where. Sure hope they came back. He had a tracker friend hunting for them. Thankfully, the blind one stayed home…

The big news: that stupid restaurant booth is GONE. Pulled it off the front deck with the mower and a rope, dragged it to the burn pile and torched it. Yay! 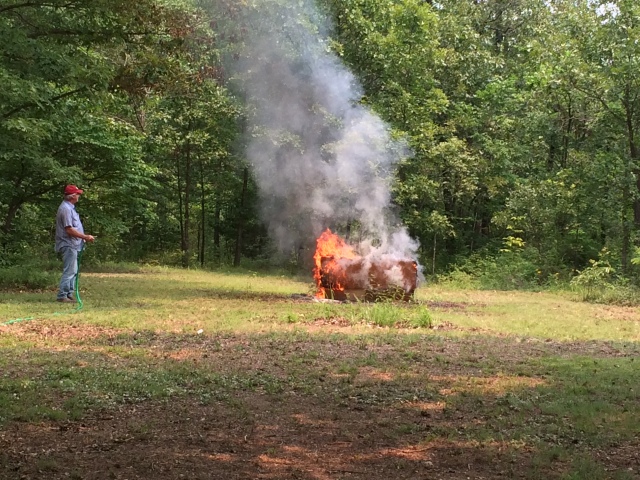 The mess is gone too, and it was a big one. Gross.

Next up, removing plywood from inside the house. Now, the photos didn’t do the place justice when we first saw them. Looked like pine and drywall, with a chair rail. The latter is outdated and frankly, I hate dusting the damn things anyway, but the pine turned out to be plywood. You can’t even paint it, because then it looks just like, well, painted plywood.

We hadn’t intended to start the remodel quite yet, but my husband decided we may as well use that plywood for the storage units in the barn. So, voila! We have new drywall on the bottom—unfortunately, we’re going to have to texture it to match the upper walls because UNtexturing would just be a huge pain in the rear. Those popcorn ceilings will be bad enough…

The neighbor’s horses DID come home; they were right down the road, just the place I’d go if I were a horse. Path of least resistance, straight to a large pasture overlooking the valley. Hope they had a good time!

So he stopped by to tell us, and we met his friend, another neighbor. The two of them want to salvage the old house, so we said yep, sure, go for it! Plus, the friend has a TV antenna for us, and he’s going to check the supposed weakness under the bathroom floor. BONUS!

The only downside to this week is the fly situation. In spite of home remedies, spray, strips, etc., we’re still being overrun by the little monsters. Oddly enough, the ticks seem to have migrated elsewhere…

5 comments on “Work Wednesday—What We Do/Did”