If you ever hear anyone say, “I love to paint! I can afford to hire someone to paint my house, but I’d rather do it myself!” run far, run fast.

That is a load of hooey.

You can tell we spent the weekend painting. Mostly.

Got up early on Saturday and pulled the irrigation system out of the garden. Damn, hoses are heavy. Especially several, attached. Sure, I could have pulled them all apart, but I wasn’t entirely sure what I was going to do with them.

By the time I finished that, and picked up the tools to store for the winter and the trash in that one pile—there’s always that “one pile”—I wasn’t in the mood to UNload the truck up at the barn. So I hopped on the mower and headed for the house, mowing along the way.

My husband was repairing the ceiling where he’d removed the walk-in closet.

I mowed around the house and the parking area, avoiding the rocks I’d dug up a few weeks ago. Still didn’t know what I was going to do with them.

Next, since I couldn’t avoid it any longer, I pulled out the green paint and glopped it on the kitchen side of the bathroom door. Glop. Glop.

A few coats later, and I got back on the mower. Mowed my way back to the barn to unload some supplies we’d brought; looked at the hose in the back of the truck.

My husband was repairing the ceiling. Yep, same ceiling.

Guess what time it was?

So my husband says, “Why don’t you just do those two big walls? But stay away from the trim or the panels, and the doors too.”

Ahem. I mentioned that I’m a slob, right?

I made my rounds, and while waiting for the drying in between coats, I decided to touch up the doors. The outside doors. That ones that already took 3+ coats. Sigh.

I’m smart, though. I didn’t put down the new doormats yet. Smart like a fox, yes?

By four o’clock, I decided it was beer time. And dinner-cooking time. I was done.

Of course, the next day, we weren’t up as early. And it was cold. Ish. Prepper that I am, I reached into my bag for jeans and a sweatshirt.

Someone needs to get her brain in gear.

My husband started sanding, which was my cue to spend as much time outside as possible. This is definitely his job. It grates on me like fingernails on a chalkboard.

So I loaded the truck, burned the trash, composted, finally picked up those damn rocks and left them in the wheelbarrow. I still don’t know what to do with them . . .

I pulled out my camping gear for the coming weekend, except for the sleeping bag. No idea where it went. It’s somewhere, obviously, but I couldn’t find it. Missed a few other things too.

And then it was time to paint.

Two coats. And counting. This is the WORST PAINT EVER. 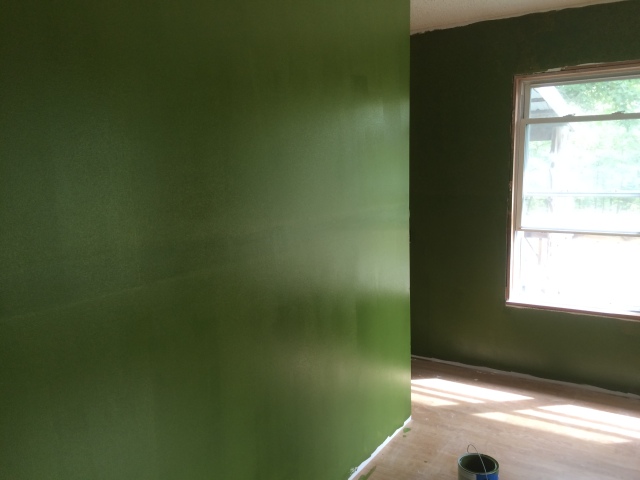