Yes, I’ve been slacking away here, trying to tie up loose ends all over the place and this last week has just been nuts. So, here’s what we’ve been up to down at the ol’ homestead and other places:

Since the last Work Wednesday, I’ve gone to the doc for a check-up—everything was great, except, you know, that age thing. Doesn’t help that Doc looks about eighteen . . . anyway, after getting my annual bloodwork in a few weeks (Doc’s idea, since I confessed I’d eaten peanut butter cups for breakfast that day), I’m good to go.

Except, well, a week later I had to go in for that yearly, um, woman’s test, the external one where it feels like a certain part of your anatomy gets sat on by a Mack truck, repeatedly, and then a week after that, I got a letter.

So much for the celebration that I didn’t have to do that for another whole year.

Long story short, I had to go back. Didn’t hurt as much, guess I was still numb, but the good news is that it was NOTHING. Whew. Won’t lie, I was a little nervous. Last time this happened, it progressed to a needle biopsy. Ugh.

I’ve also had three book events in the last couple weeks, and the kid got his license—and the driving bug bit him pretty hard right after that, so I’m sure my blood pressure has gone up a wee bit. The hubby had a doc appointment today too, and he SAYS he’s fine. Of course, he didn’t mention the bad cough he’s had lately, because, after all, HE WASN’T COUGHING IN THE DOC’S OFFICE.

Oh, and we had my husband’s retirement party! Finally, it’s official! And in case you’re wondering, I got him a pair of overalls…

Okay, then, on to the stuff that’s really important, the reason you’re here: the farm.

We’re still playing with the new toys, and we spent eight hours last weekend cutting, hauling, and burning brush. We drove home, and the next day I went back to take my mom and stepmom out to see the place. I think they both want to come live there . . . that could be problematic . . . hmmm. 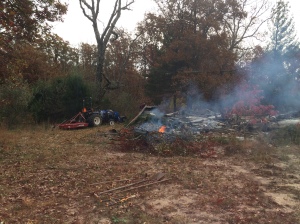 The bathroom got a new ceiling fan, because the old one looked pretty bad compared to the new ones in the kitchen and living rooms; and we did get the new light fixtures for the bath and kitchen, but they’re still in boxes until—

This weekend we’ll be pulling out the bathroom vanity and mirror and adding new ones, plus a linen cabinet. Naturally, we were both thinking after that the shower would look pretty crappy, so we’re still thinking on how to remedy that . . .

The really exciting news is that we ordered the kitchen! And it will all be here—December first.

But that’s okay. We still have to pull out the old one, and THAT will be a project. Yikes. But I’d bet we’re among the very few who ordered a gun cabinet for the kitchen, amiright?

The new appliances are coming a couple weeks before that, along with the tile for the floors. I think I’m getting tired just thinking about it all . . .