Kind of have a dilemma here. Since it’s a holiday week and all, I’m going to combine a few posts. I know, I know, you’re thinking, “Crap, and she slacked off last week too!”

So. Let’s start with prepping:

Around here, folks, it’s getting chilly. Last weekend, at the farm, it was 19 degrees when I got up Saturday morning. Insulation of one’s home is very, very important . . . we knew it was great, because we can’t hardly hear a thing outside when all the windows and door are closed.

Fortunately, they say it’s better to sleep in a colder room than a hot one, because that 19 degrees translated into 55 in the house!

We do not have central heat—and we usually turn the thermostat to 68 at night when we’re in town—but we do have an electric fireplace that’s set to turn off about two hours after we go to bed, and we have a shop heater in the bathroom (turned off overnight) and a heater on rollers in the bedroom area.

And an electric mattress pad.

This is the known around our house as The Best Thing Ever. Nothing beats it for keeping warm, and it’s great for sore muscles too, at the end of the day. That, with a heavy quilt, will keep you toasty.

Until you get up. Ha.

Dressing for the weather, too, is something to consider. Thermal underwear, layers, or even those battery-operated warming boot soles that keep cropping up in my newsfeed . . . Shivering burns calories, which can sometimes be good—like the week after Thanksgiving—but in a survival situation, you’ll be limiting calories in the first place, and a warm night’s sleep will do wonders for your physical health and mental outlook.

Moving on to the remodel:

Last week, the kitchen came out—all but the refrigerator, which got shoved over to block the lean-to door. Good thing we aren’t using that lean-to just yet. 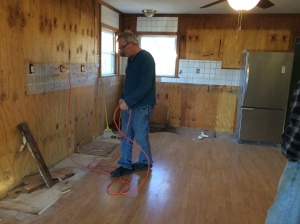 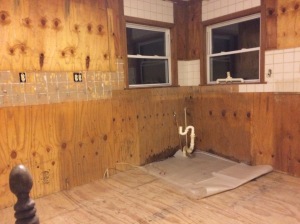 Of course, this also requires some cooking/kitchen adjustments:

But—NEXT week, you’ll get to see the progress on the NEW kitchen! Yay! Oh, and while the guys were busy, I set up and wired the CB base unit. Pretty sure, though, that someone else will be installing that 30-foot antenna on the roof . . . pretty darn sure it won’t be me!

And finally, Fan Friday: Man vs Woman, or “Things I’ve Learned this Week:”

My husband occasionally needs my help with projects, not just the ones we work on together. I’ve learned, over almost 19 years, to wait at least ten minutes before jumping up and running to his side to hold something or whatever.

Unless, of course, it’s an urgent situation with “Hurry, dammit!” thrown in there.

But typically, if I come a’runnin’, I have to stand there and wait for at least five minutes while he recalculates or refigures something. Or looks for a part or a tool. No, guys, five minutes isn’t long unless your wife is standing in one spot listening to you mutter to yourself and wondering if you’re talking to her.

See, if a woman needs help, say, in the kitchen—am I being sexist? Too bad. That’s how we roll around here. Well, not really sexist, but I guarantee you that he’s the one that calls for help with a project and I’m the one in the kitchen—she’ll call you in and hand you a jar and say, “Open it, please.”

There I go again. Sorry. Men ARE typically stronger than women, so deal with it.

But she won’t leave you standing there for five minutes.

Part II of Man vs Woman:

When you, a dude, walk into a kitchen where your wife is preparing a meal, you need to realize that she’s not only chopping an onion, for example, but she’s timing the asparagus in the oven, mulling over which dish to start prepping next, and wondering if she has enough of that one type of seasoning.

While trying to hide the birthday cake topper for the 18-year-old’s cake, in case he actually wanders out of his room before the dinner bell sounds.

Okay, we don’t actually have a dinner bell, and he’s gonna love this cake. Or hate it. Heh.

My point is that, walking into the kitchen and not seeing the mop bucket by the door should NOT prompt the question, “Where’s the mop bucket?”

The bucket is either by the door, outside the door, or emptied and put away and in the laundry closet.

If, and only if, it’s not in one of three usual places, THEN you can ask. You are not interrupting the onion-chopping, women are very good at multitasking, you are interrupting her train of thought.

And before anyone says something like, “Your husband USES the mop bucket??” I will tell you that yes, he does. And the reason it wasn’t by the door was because he left it there yesterday, instead of taking it outside and emptying it, and I moved it.

And he did bring it in and he did use it and then put it outside again.

But here’s the cake. What do you think? Too much flashback for the kid?

Error: Twitter did not respond. Please wait a few minutes and refresh this page.