My husband has been out the farm for a week now, working his tail off. I arrived last Monday in time for the appliance and tile delivery.

Well, anyway, they took back the wrong stuff. Of course, I’m wondering what else got messed up . . .

Oh, yeah. The cabinets. They arrived Tuesday, and I have to say, I was impressed with the delivery—both of them, actually. The first guys were hilarious—coming out from STL, it was probably the first time they’d been out in the boonies. The second guys—and one gal, come to think of it—arrived three hours ahead of schedule.

So here’s what the living room looked like that day: 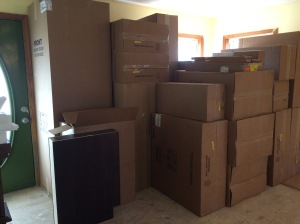 Tile, appliances, etc. were still in the barn and thank goodness—here’s what the “bedroom” looked like:

Between Monday and Tuesday, I learned how to put down cement board. Gee, that’s fun. The drill took off a strip of skin on my thumb—from using it, not from the bit itself—and I have a couple blisters. Yay.

And then we opened up the cabinets. Took me three trips in the truck to the burn pile. It looks like Mount Cardboard up there. Sadly, no pics!

So the base cabinets got set. Remember now, we ordered this stuff the end of October, so I’d pretty much forgotten all the cool stuff—a bread box, a knife drawer, pull-out spice racks and pan holders, and a mixer shelf that lifts up. And the wine racks, of course. 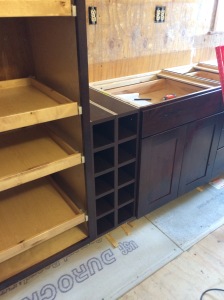 Then it was time for the wall cabinets. Oops.

Between me and my math skills—okay, not “skills” but whatever—and the new guy who helped me design the kitchen, the wall cabinets were a little, um, off. Just a little. So. We ended up running into town to order two more and to return two. That was fun.

More fun, however, was calling the next day after I realized the fifteen-inch cabinet we had opened to the right, not the left. It really does make a difference if the damn thing is sitting on the floor upside down . . .

I had to head back to STL on Thursday, but our friend Ed came down to help. He arrived just as the counter guy was finishing the template for the granite, and he and my husband installed the microwave and the ovens—and I can’t wait to see them in person!

But here they are; you’re getting to see all that *I* got to see:

They’re cement-boarding and tiling the rest of the weekend, while I, sadly, am stuck at my desk. And decorating for Christmas. And paying bills.