I’ve kept you all entertained, or something, the last ten months, with the house remodel. I’m happy to say that we’ve reached the end!

We’re still mulling over the bathroom, particularly the shower, which means we haven’t yet tiled the floor. Or finished the baseboards or doorframe in there. And the dungeon, aka the lean-to, still needs some work, mostly cleaning and some repairs.

Or knocking it over and starting from scratch.

Oh, and the kitchen backsplash. Well, there’s a giant PITA.

Fortunately, there’s an upside: if you don’t look up, you won’t notice. Much like the rest of the house, if you deliberately look anywhere besides the booboos, it’s all looks great! And that, my friends, is due to my husband—the booboos are mine, I admit it, I kinda stink at this stuff.

But truthfully, we’re move-in ready. And it’s starting to look more like a home and a lot less like a construction zone: 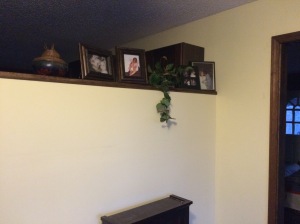 In fact, during this past work session, we’ve been out in the woods building a campsite: 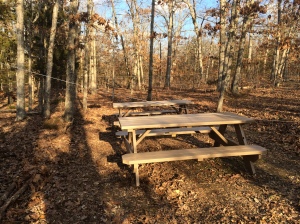 See, I love to camp! Now, living in the woods is awesome, but sometimes I want to sleep in a tent and cook over a fire. So, the campsite. In fact, our third annual campout is in March—yes, sometimes it sleets—and we need to be ready.

The outhouse is in pieces in the barn yet, under construction, and the kitchen shelter itself is somewhat imaginary, although if you look closely at the picture, you can see the string outline. Those are both waiting for at least 55 degrees, and will be followed by a small shower house some time in late spring or early summer.

In the meantime, I’m searching for a smaller, more wintery tent . . .