We officially moved to the farm this past Saturday! It seems very strange not to be figuring out what to do, and when, before we drive back to STL in a few days. The kid came over early Saturday to help load the truck, and by the time I left around noon, he and my husband were still at it. 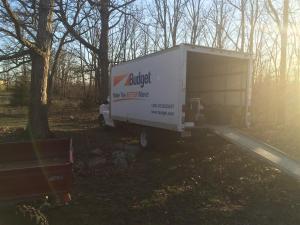 I got here around 3:30 or so and took care of the dog and cat and watered my plants. I put the cat, who’s never been here, in the dungeon while I unloaded the car. Half an hour later, he was meowing to get out. He circled the house twice before scoping out all the windows and then taking a nap on our bed. He finally got to go outside the next day, and boy, does he love that! I’m not sure he could clear the fence, but he might try. I’m not too worried about him—he’s a 20-pound Maine Coon. 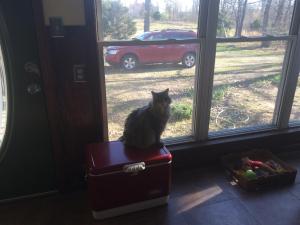 The unpacking is almost done. Still have a few boxes that either can’t yet be unpacked—like stuff for the laundry room—and some pictures that I have no idea where to hang, but mostly it’s done. The biggest part was rearranging the things we’ve been using and incorporated the REAL stuff from STL.

My husband has finished clearing the garden area and ordered fish for his pond. We picked up a horse trough yesterday, but no horse yet—this is first going to be fish transport on Saturday. At Fish Day.

I also discovered I have family in the area—how weird is that? My cousin passed away a few days ago; I saw her obit in the paper. I haven’t seen her in probably 30 years. Her brother still lives here.

When I was growing up, I spent a lot of time at Nana’s house. Aunt LaVerna lived next door on one side, and Aunt Mary on the other. I ran and played in all three yards and visited both of them a lot. Sometimes, my cousin Dolores was home; she was a mail carrier. I don’t remember her brother Lon very well. They were both 30 or so years older than I.

I DO remember a big family ruckus though, probably in the early 90s, when Dolores and Lon moved Aunt LaVerna out “to the country.” Just didn’t realize it was here! This is almost as strange as when we moved from Colorado to Granbury, Texas in 1999 and discovered that my husband’s grandparents had lived there—and their marriage certificate was still at the courthouse!

Well, anyway, back to the work part:

Yesterday, before the town trip to buy fish and a few groceries, we seeded the pasture with 50 pounds of fescue; going to add some alfalfa or lespedeza too. Planned it ahead of the nice rain we got this morning—perfect for sprouting.

I also planted my signature purple verbena for the five hanging baskets on two of the decks. The third deck, off the kitchen, is for my seedlings and herbs. And a grape vine. I think that’s what it is. Hard to say… 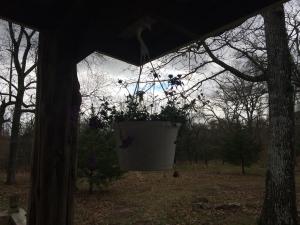 And I’m pretty sure all these gorgeous little yellow-flowered trees are sassafras. Don’t think I’ve ever seen them before, but we have a quite a lot. The blueberries wintered well and the peach trees have leafed out; the apple trees are budding. 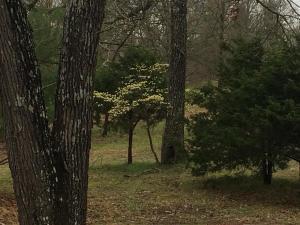 4 comments on “Work Wednesday—Moving In and Doin’ the Chores”