Most days, we get up with the sun and drink coffee until our brains start to function. We take care of the dog and cat, of course, and I pick up all the miscellaneous stuff from the night before, put away dishes, make the bed, all the mundane things that most people do every day.

Of course, I get to do some of that from the deck while the sun rises . . .

I do my PT and make breakfast and check on the herbs and seedlings, burn trash, and again, all those boring things everyone has to do.

And I work on business-y stuff.

After that, we have a project. Or ten.

Yesterday, I put on my shiny new red boots—which aren’t so shiny anymore—and tromped out to our newly plowed garden.

And before anyone mentions that it’s TOO big, let me tell you that it does take quite a lot of rows to feed two people. And trade with neighbors. Or even sell some at a local market if it comes to that.

We’re not using it all this year. We’ve doubled the size from last year, particularly since we’re here fulltime now. Of course, this year we’ll actually have more of a return, thanks to the FUD fence.

I’ll leave it to your imagination to interpret that.

Yesterday was the start of the FUD fence: twenty-some short posts in the ground, topped with 10-foot-tall poles, surrounding about 330 linear feet of garden. 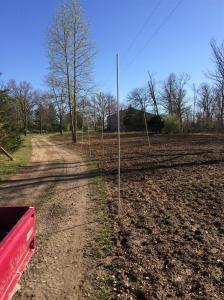 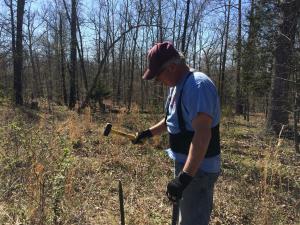 Later today, the poly-something fencing arrives; we’ll attach it to the poles and be ready to roll.

In a manner of speaking. It’s not quite that simple and, I’m sure like most things, will take 2-3 times as long as we estimate. But this year, NO DAMN DEER will eat my green beans!

In other news, the peach trees we planted last fall are fully leafed out and the apple trees are budding; and I think—going out on a limb here—I’m going to have more than five blueberries this year! We’re also cultivating a wild raspberry patch. Have a ton of them out here, but these are all grouped together right by the fruit trees. And yes, we’re fencing those in too.

Once the FUD fence is finished and the garden planted, we’ll move on to the next project: more fencing. Our perimeter fence has a couple gaps on one side, some missing hogwire on another, and is completely non-existent on a third side.

Then, of course, there’s the dock and shelter by the pond, the kitchen shelter and barbeque at the campsite, the barn itself, the pasture fence, clearing, burning, and a few other things . . .