As you know, we’ve started and finished a lot of projects around here. And started a few more . . .

We knew, moving in, and we still had the bathroom to finish—mainly the floor, but also replacing the shower. No, there’s nothing really wrong with it, but compared to the new vanity and linen cabinet, well, it could use some upgrading. 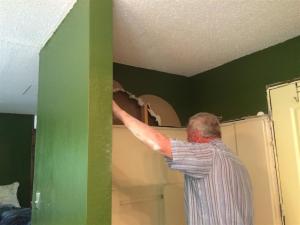 Then we decided to pull out the jetted corner tub. While we might use it occasionally, it’s pretty big, and with the 12-inch seat and shelf all the way around, it takes up a lot of space.

So we ordered a clawfoot tub. I’d always wanted one . . .

We’re taking out most of the shelving/seating under the windows too; the cat will have to deal with a bit less space to gaze out the windows. He’ll adjust.

All the pieces have arrived. Let the fun begin! Ha.

Before all this, however, we had, for some time, noticed that our pipes were gurgling a lot whenever a drain was used. Hmmm. I spent some time at the lagoon, trying to determine if we had something clogged or what. My husband searched, in vain, for an exhaust pipe on the roof.

We called the plumbing company in town. Nope, no exhaust. And the lagoon hadn’t been maintained very well, if at all.

Yesterday, the backhoe was scheduled to arrive—in the mud and rain. Needless to say, that’s been rescheduled, along with the exhaust which, apparently is there–under the house–but uselesss for some reason. But they did install the shower base and moved the drain.

I spent the day at the campsite with Kura. Too much commotion for both of us. 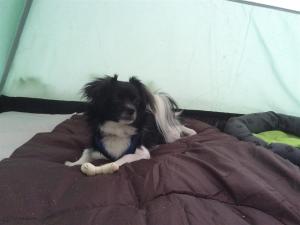 And now, let the tiling begin! 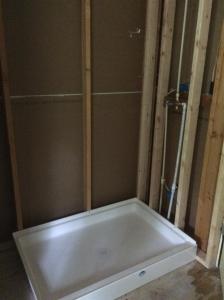 Shower, floor, tub. And additional shelf space where the shower used to be, since the new one is about four feet instead of five. Maybe next week I’ll have pictures of the finished product—or next month!