I just set up the game camera in the pasture—I’ve been wanting to do it for a while, but other things kept pushing it out of my mind. Unfortunately, the best shot I have are us cleaning up the pasture and Cav from a distance, and an extreme close-up of me while I was setting up the darn thing!

But I do have some other pics: 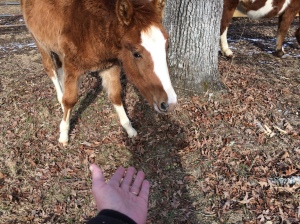 Had a lovely day yesterday, too: 64 degrees and sun in the afternoon, but with a crap ton of wind! Up to 35 mph! Part of the fence were blowing, as well as the greenhouse, but everything held. I let the horses into the south section, which has grass, while I cleaned up the other one and the barn and trough.

Wow. Can’t skip days, that’s for sure, although in my defense, everything was covered with snow this past Saturday.

They had a great time, and of course THAT’S when I should have had the camera set up! Chestnut and Cav were racing around and Cav gave a few little bucks. Too cute! He was really feeling those oats . . .

I’ve been hand feeding Cav, holding the bucket for him during the first half of breakfast or dinner. We’ve progressed from his fuzzy little forelock all the way down his face, his cheek, and just yesterday, his neck and mane. I can’t really say he “loves” it yet, but he rarely startles anymore.

I’ve been working on his right side, simply because that’s how he arrives at the bucket. Last night, I moved to the left.

Well, it seems that scary things are on the left side! Even things that are becoming normal on the right. Just another problem for which to find a solution!

Cody, on the other hand, is still wary. She answers my whistle when I come outside in the morning, and she now stands facing the house instead of giving me a butt view. Little things . . .

Yesterday, when I was feeding Cav, she could see her bucket about ten feet behind me. She rested her head on Cav’s rear and watched, then finally circled around to her own bucket. ‘Bout time—when he’s done with his, he generally aims for hers, and he’s gotten a nibble or two on his ear for trying, too!

Here’s the biggest difference in personality/trust: I opened the gate just a little this morning, so Chestnut wouldn’t come through. Cav came right on in and started grazing. Cody stopped short and looked at me, ears up, waiting. I opened it a bit more and moved back as far as I could, about an arm’s length so I could hold the gate, and she trotted on through. Silly horse.

This morning, we started de-worming. I finally got an answer from the vet on dosage that made sense—no more of this “10 mg per kg of weight” nonsense. That part I could figure, but how to measure it out was beyond me. Sigh. Anyhow, we’ll do this for five days, then wait two weeks and repeat it. It’s pellets that go in their food; I can’t really tell a difference between that and their feed. Hopefully, they can’t either!

I’m increasing their grain, too, a little at a time each day. Cav is halfway to his full ration, but Cody is a bit behind. Slow and easy is much better than overfeeding, especially for horses who’ve never had grain before. Having a third arm would help! That way I could put her bucket down and hold Cav’s AND keep him from wandering away to the unattended bucket . . .

They’re both spending half a day or so in the south section of the pasture, alone most of the time. Chestnut gets her turn too, but she’s much less bitchy when she’s been separated from them for a couple hours. The grass and the ground there is better, but of course, it’s closer to the gate and the road. And with this wind lately, well, we’re doing a little fence maintenance, just in case!