On her first day, she climbed through the fence into the south paddock. Quick as a wink, her front end went through and her back end followed with a little more effort. We spent the evening, until about 9:00 p.m., putting up rolled wire over most of the north paddock fencing, and I was up again at 3:00 a.m. to make sure she hadn’t escaped again.

The next morning, last Friday, I realized that one of the horses was going to put a foot in that wire and get stuck and, sure enough, as we were taking it down and replacing it with conduit pipe between the bottom two boards, Valentine put a foot through it.

She was great, though, very calm, waited for me to get her out. Thank goodness.

Trinket, it seems, has two speeds: Kentucky Derby and nap. Personally, I think she should nap a lot more! On her third day, she decided Mom’s bucket was da bomb and had to stick her nose and each of her feet into it, one or two at a time, of course, until it turned over. She then proceeded to “eat” Mom’s dinner; she also tosses hay in the air and pretends to eat that too. Bless her gummy little heart—it’s hilarious!

Charm is getting tired of her paddock, aka the nursery, but I can’t let Trinket in the south section—I told my husband we need more pipe. Lots of pipe. Pipe, pipe, pipe!

But they both get to go in with the others at dinnertime, and for two nights I let Cody in with them for the night and following day. She can babysit and give Charm a little break. Besides, better four equine eyes than only two on the little stinker!

At birth, she was 8hh, or 32 inches, which is about 5 inches smaller than an “average” size foal. I’m still trying to measure for weight, but I’m guessing that now she’s maybe 85 pounds, so around 80 at birth. 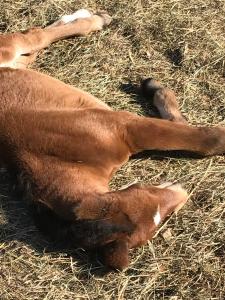 2 comments on “More About Trinket”