One year ago today, I received pictures from my hauler, Jerry, of our pending arrivals, Cody and Cav: 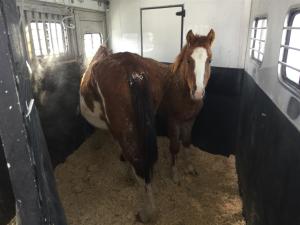 They left South Dakota that day and traveled to his place in Wisconsin; they stayed there almost a week while he recovered from several trips to ISPMB.

On December 13, about 10:30 p.m., Cody and Cav were home! Of course, pictures in the dark are hard to capture, especially when mustangs are involved, but thanks to Cody’s paint markings they were definitely easier to see than my Virginia Range mares that came a couple months later!

It was really, really cold that night, and I had to wait until Jerry temporarily off-loaded a couple other horses, but my mustangs came off the trailer and trotted off into the dark. Our visiting mare, Chestnut, was in the other paddock, trotting up and down the fence line all night—she’d been raised and housed with cows, so was super curious about actual horses!

The next day, all three horses had a meet and greet. Chestnut was particularly taken with Cavalry, but a bit of a bully with Cody—which is a big reason Chestnut returned to her home a month or so later. Here are some pictures of my small herd of two (at the time!) over the last year: 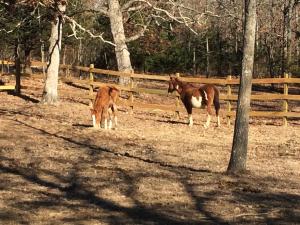 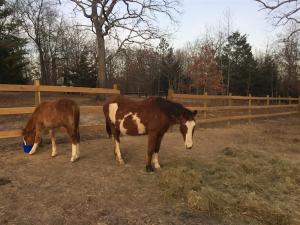