I can’t believe it’s been seven weeks, almost two months! The big questions now are “exactly how old is Cavalry?” and “when is Cody’s foal due?”

Typically, mares aren’t bred immediately after foaling, but physically it’s possible; it’s called “foaling heat,” and occurs within a week or so of a foal’s birth. The gestation period for horses is about 11 months, so two foals from the same dam could be just eleven or eleven and a half months apart in age.

A friend and I tried to “age” Cav by looking at pictures of her foals and of him. Hers are reportedly turning eight months old today, February 1st. I’m sure he’s not any younger than that; but I’m putting him at nine months based on—wait for it—his tail, of all things. Compared to her foals, his is longer and more “horsey” than a foal’s tail would be.

But, here’s the thing: looking at his teeth a few weeks ago, I’m not sure if I saw the third set of baby teeth or not. For obvious reasons, it was a really quick look! But yesterday, with the aid of a very large carrot, I got a much better look, and the third set is most definitely there and looks more like a set of yearling teeth.

And that means that every morning, I count how many horses are in the pasture . . .

Now, originally, I’d pegged Cody’s due date at April 20th, then revised to May 20th based on the discussion with my friend. Cody’s size, however, makes me think it might be sooner that both those dates.

I can’t really use the size of her bag, because Cav is still nursing a couple times a day for maybe a minute at a stretch. However, other signs, like her tail taking its time to lower after she raises it and the muscles on her rump becoming looser, are there.

I may be overthinking the entire thing. Maybe.

What I really think is that I better keep counting horses every morning . . . 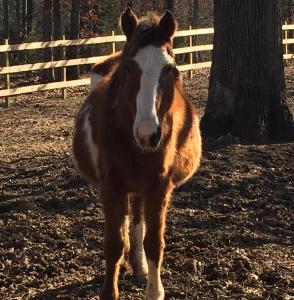 My mustangs have been home now for a month and five days. They seem to like it here, they’ve never acted crazy, never tested the fence; farm noises don’t bother them, although the first couple times they heard an engine start up, they’d stop to listen . . . now they’d don’t even flick an ear.

Unfortunately, we’ve had some nasty weather: ice and subzero temps, thankfully not at the same time. And rain. Good grief. More coming tonight, and the pasture is only starting to dry out from the last monsoon.

Cody is still wary of me. When I open the cross-fence gate, she’ll come close, then bolt through. But I’m happy to report that she’s got that down to a fast walk this week! She, like Cav, has discovered that buckets hold good things, and when she sees one she starts a single-minded walk towards me, ears up.

She will not, however, eat while I hold the bucket. I have to set it down and move, oh, three feet away now. It used to be a good ten feet, so there’s progress. And she doesn’t move away from me while I’m out in the pasture, unless, of course, I cross that mysterious three-foot line. But she’ll answer my whistle!

Chestnut, our visiting horse, is presenting a bit of a problem. I’m not sure if she’ll be staying. Oh, she’s helped “teach” Cody and Cav that I’m not a threat, and they see her getting scratches and treats. I do believe that helped. The problem, though, is that Chestnut is territorial when it comes to food—hers or anyone else’s—as well as attention. It’s difficult to feed and to work with the mustangs.

And Chestnut is around seven years old, not worked with much, is rude and pushy, and never been saddled. She tends to nip on occasion, looking for treats, and tosses her head quite a lot. Not sure I’m up for getting rid of bad habits before starting on good ones. I might be too old for this. And too breakable . . .

That said, she is entertaining. Today, while I had the ATV in the pasture, she checked out the milk crate strapped on the back. Tried to eat my gloves. Slobbered on the seat. Then she simply took off the seat. I turned around to see it hanging from her mouth . . .

Cav is coming along nicely. Poor thing was so pitiful in the ice storm, but he’s finally dry and fluffy again. I’ve been able to run my hands and a cloth all the way from his face to his rump, and down his left foreleg. Most of the time, he’s distracted by the bucket, but not always. He responds pretty well to pressure to move him a step sideways or to back up a bit, not completely docile, but as you’d expect and want a mustang to behave—with just a touch of attitude that says, “Okay, I’ll do this, but only because I want to at this moment.” He will learn, though, that he’ll want what I want . . . eventually.

He likes to be scratched under his jaw, and he tolerates my rubbing his ears and playing with his forelock. And now that he’s wormed and getting plenty of food, he likes to run and buck when he’s in the south section—often with Aunt Chestnut!

Today he was introduced briefly to a lead rope—I held it and let him smell it and play with it. Had it in his mouth a few times, but since it wasn’t food, he wasn’t too impressed. I rubbed it on his nose a bit and let it dangle and move a little. He was also interested in the curry comb, and I was able to brush him just a little, until I hit a ticklish spot. Apparently he has several of those! 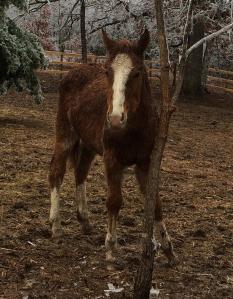