There’s not a lot to report on projects around ye olde homestead lately, since we took off for the holiday weekend. More or less. 😉

But here are a few shots of the most recent things with which we’ve been occupying ourselves:

We’re also finishing up the security system this coming week, which won’t be complete until the fall when we finalize the purchase of some additional acreage and undertake the perimeter fencing. After that, we’ll be putting in the pasture fence—about an acre’s worth, just enough.

Oh, and that security system? Just make sure you call ahead . . .

Sunday, my husband started more bathroom destruction: the removal of the giant corner jetted tub. Now, it might be nice to have now and then, but it’s a real PITA to clean—not to mention getting in and out. Plus, it takes up a lot of room and collects dust and tools and parts.

So we decided to remove the wide ledge at the back of the room, but left the other one on the east side. At press time, the cat is still trying to figure out why his dish moved and how he can reach it . . . 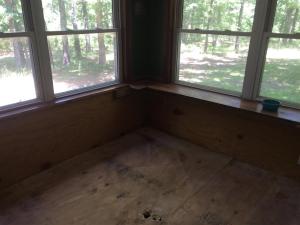 The next step was rebuilding the walls; fortunately, we have all the old cherry that he pulled off the outside of the tub, and of course, after that, a new tool is needed for the edges of the sill.

Off we went to the city.

About halfway down the state highway, the car dinged and it took me a minute to realize it was NOT the “change oil” ding, which sounded a couple days ago, but the YOUR ENGINE IS SERIOUSLY OVERHEATING ding.

Pulled off the road onto a farm lane and shut down the engine.

We were weighing our options when a pickup slowed and turned around. Brent offered to run home and get a couple gallon jugs of water, which we accepted, and then chatted with us for a bit while the car cooled down.

He also gave us recommendations for two local mechanics, told us he knew exactly where we lived, having known the previous owner some time back, and told us about the downfall and history of the little ‘burg nearby—actually, literally, a wide spot in the road.

He even offered us a ride, if the car wouldn’t make it either direction.

Finally we decided to go back home and grab the truck and go get a new whatchamacallit. You know, the thing that regulates the radiator pressure. The words, Robin, use the words!

It took us a bit to get there, though. We drove a few miles, the gauge went up. We stopped. We drove again, the temperature rose. The last stop seemed to do the trick—we made it 10 miles and the gauge stayed right where it was supposed to be.

Must have hit a rock or a pothole just right . . .

Well, I elected to stay home after this and finish up some trimming in the orchard.

Guess we’ll have to put off tiling the bathroom floor until tomorrow.