Yes, I’m going there, because the whole “issue” pisses me off no end. Otherwise intelligent women are blah, blah, blah-ing about “my body, my choice.”

Yep, your choice. To be made BEFORE YOU HAVE SEX. Yes, birth control can fail—abstinence will never fail. Very, very few women, relatively speaking, become pregnant from rape or incest. Not that it can’t happen, but statistically, it’s rare.

Even so, why should an innocent child suffer? Why compound the crime of rape or incest with murder?

Do you even know what that word means?

From Webster: a human being or animal in the later stages of development before it is born; a developing human.

It’s so not like removing a part of your own body, a tumor, a mole, whatever. It’s a removing a LIFE.

Sex is fun, enjoyable, a blast, whatever you want to call it—but it is NOT a right. You are not entitled to have sex. Period.

It’s a risk you take that you may end up pregnant—assuming you are a woman having sex with a man. It’s a FACT, people. There’s a chance, no matter how remote. So act accordingly. Like a responsible adult, instead of with a whiny me, me, me attitude.

Here’s another fun fact: Roe vs. Wade was a farce. The girl claimed she was raped. BAM! Abortion on demand. Guess what? She wasn’t. She later retracted the whole story. You have an entire country applauding abortion because one woman said she was raped. And was not. Let that sink in.

Many of you sob over lost and abandoned and abused puppies and kittens. WTF? Are human babies less valuable? Geez, get your head examined.

As for that bullshit about “Republicans want to save babies, but not feed them,” you are full of it. Republicans do NOT want children to starve or live in poverty, but they DO want their own freakin’ parents to step up and take care of those children.

Bringing you up to speed, we’re back it on the outdoor projects: farming and fencing. We  installed  the new wood furnace last week, and while we tested for draw, we haven’t actually used it yet:

We picked up an old Ford field tiller at an auction, and that’s certainly making the groundbreaking easier in the garden extension. It took a day to pull down the fence, work up the ground in the current garden, and put the fence back up to keep the deer out of the orchard. Come spring, we’ll add on to the fence. 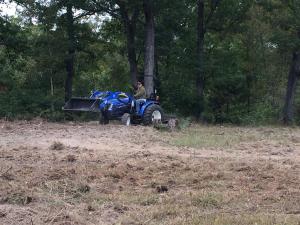 Also borrowed a rock rake. Have to take care of this year’s crop, after all! 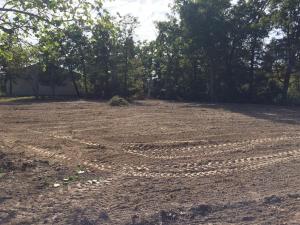 The pasture fence posts are here! And some are in the ground—the pasture will be about 300 feet by 100 feet, or just over three-quarters of an acre. If we ever manage to get additional land, we’ll revisit this, maybe add another pasture for cows.

In the meantime, we’re putting in an open pole barn for shelter and hay storage, because it looks like we might have a visitor from the neighbors: Chestnut, a seven-year-old sorrel mare who needs to be saddle-broke. No, I’m not planning on riding a bronc. She’s broke to harness, and needs some refresher courses.

Of course, I’m also the one who tripped over a landscape timber and had very sore knees for a couple days, so we’ll see how this goes. I’ll keep you updated!