We’re winding down for the winter—thank goodness! While I’ve managed to keep up with my PT and stretches, my range time is way down the last few weeks.

The fence is now livestock-proof, although I’ll feel better when I finish putting the third screw in all the boards; I’m about a third of the way done with that. The gates are up and the latches/chains installed. And yesterday, we had a horsey visitor!

Just for a half hour or so; the neighbors stopped in for a few. The poor thing hadn’t been ridden in over a year, I think, but she sure liked the new grass coming up! She did NOT like the saddle . . . Maybe I’ll have a new client. 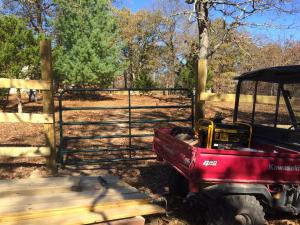 We also have the greenhouse up and anchored. I brought my hanging baskets over there, along with the herbs, and I planted some cilantro and oregano. I’ll be bringing in my late pepper plants too, and have some other seeds to start for the winter.

So far, and we’ll see after tomorrow if we get the expected 30 mph winds, it’s a great little greenhouse! Coated steel posts, heavy plastic, and easy to assemble—we kept thinking we were doing something wrong, ‘cause stuff NEVER works out this fast!

The temperature monitoring is going to be the real challenge, though. It’s gotten as high as 115 degrees in there, but nearly as low as the outside temp early in the morning before the sun hits it. I’d been opening the window for an hour in the early afternoon, but I’m going to re-think that. I’ll keep experimenting, and yes, I have a spreadsheet!

What’s left in the project department? Well, the holidays are coming, and we’ll like convince a kid or three to come visit, so now I’m looking at the house again. The plan was to build a sofa table and a coffee table, and those will come in handy in the next month or so . . . and I just realized we never stained the bed steps (for the dog) after my husband built them, um, a few years ago!

And we’re still trail-breaking. The goal is to go around the property, and have a few lead-ins from the house and barn areas. The East Trail is done, to the north, and we’re working on connecting it with the North Trail. But yesterday we went west; we hadn’t done much exploring there except the perimeter, and man, that is some rough land! Very pretty, though:

5 comments on “Work Wednesday—Are We Done Yet?”