Today’s guest post comes from Conny Manero, a writer friend of mine from our online article-writing days. She has published three books, and is working on several other manuscripts.

“Why are we writing?

“With the birth of self-publishing companies, a lot of people reached for pen and paper, or fired up their computer and started writing stories.

“Self-publishing companies make it easy.  Just upload the manuscript, pick a cover design and you’re done.  But then what?  Now that the book is published, who will buy it?

“Not only do mainstream authors have a proper publisher who has contracts with bookstores where they can offload hundreds of copies, those publishers have a marketing department and an unlimited budget for promoting an author’s latest work and sending out complimentary copies.

“In addition to posters and ads, the marketing department organizes book signings and appearances on radio and TV.

“Self-published authors have none of that.  If they want to send out complimentary copies, they have to pay for them.  Press releases to radio and TV are a waste of time.  As for getting books into bookstores… I tried that once.

“I approached the store manager of the book chain Indigo.  I told him about my book and showed him a copy.  When I asked for shelf space and a book signing he was all for it.  Everything looked promising until he asked, “Who is your publisher?”  When I told him the book was self-published, his enthusiasm went from hot to cold in a matter of seconds.

“Truth is, no matter how popular self-publishing has become, for bookstores it’s still a dirty word.

“Part of the problem is that some self-published books are not worth the paper they’re printed on – they’re not just bad, they’re very bad.  Some are littered with typos, some have bad grammar, while some are factually incorrect, or just poorly written.

“Take Maggie’s book for instance.  She wrote about the poor starving children of Africa.  When I asked her about her experiences in Africa, she told me she’s never set foot out of Ohio.  Her book was purely research.

“Why do some people think they can get away with that?  I suppose some clever soul is going to come up with the idea of writing about climbing Mount Everest or crossing Niagara Falls, just because such adventures can be researched online.

“Do I have a mainstream publisher for my books?  No I don’t, I self-published too.  Are my books any good?  Who knows?  Family and friends say yes, but they’re not exactly reliable critics.  Would you tell you tell someone you know that his/her work stinks?  Of course not.  Not only do proper manners forbid such honesty, you wouldn’t want to hurt someone’s feelings.  Besides, what’s good for the goose is not always good for the gander.

“Perhaps what some writers need are good editors.  Have you ever noticed how published authors always thank their editor?  That’s because they make the original story better.  Who knows what the original manuscript looked like?  Maybe those famous authors write no better than you and I, but their publisher can afford to hire a talented editor.

“Why are we writing?  I no longer know.”

I wanted to add a bit to Conny’s contribution today. She makes some very good points about self-publishing, especially when it comes to the attitudes of some booksellers. However, chain stores such Indigo or B&N frequently cannot host events or stock SP books for one reason: most SP books are print-on-demand, or POD, and aren’t in the registers of most chain stores. That means that, no matter how many books you might sell at an event, the store has no way to pay your for those books. One possibility is by taking payment yourself, which might require some extra accounting and work on your part; some stores might work with you, in that case.

Another thing Conny mentioned was traditional publishers. The Big Six, or Five, may unload “hundreds of copies” through big chain stores, but most indie booksellers purchase 3-4 copies of a book through a distributor such as Ingram or Baker and Taylor. And, unless your name is Patterson or King, they aren’t going to spend money on ANY author, new or established. Sure, they have contacts, and their names alone can open some doors, but they’re downsizing just like everyone else.

However, there are traditional publishers who aren’t part of the Big Five – small presses, like RHP, who do pay standard royalties (or higher) and who do a lot of promotion. The author is also expected to do promotion and marketing, but many, many authors with the Big Five do that too.

Whether an author goes the SP route or obtains a contract with any traditional publisher, there’s a lot of work to be done for everyone. The first thing, of course, is to make sure you have a top-notch product: your book. Then you have to put yourself out there, take the good with the bad, and keep working. Often, the writing turns out to have been the “easy” part. 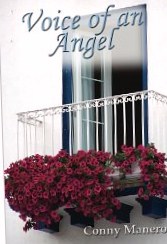 Conny Manero lives in Toronto, Canada, with her son and four shelter cats. She is the author of two novels, “Waiting for Silverbird” and “Voice of an Angel,” and two children’s books, “Kitten Diaries” and “Debbie” (unpublished).  She has contributed to publications such as Chicken Soup for the Soul, Elite Magazine and GreenPrints.  She is also a freelance writer for websites such as Life Answers and Daily Glow.

When not writing, Conny is an active fundraiser for the Toronto Cat Rescue and a league and tournament player in ten-pin bowling.

You can read more at Conny’s blog.

2 comments on “Why Are We Writing?”